ONLY ONE DROP OF ARMENIAN BLOOD IN THE VEINS IS ENOUGH …

On 27 June this year, in the Puppet Theatre in Plovdiv was presented the show on the novel by Varujan Vosganian “Whispered book” in Armenian, dedicated to the 100th anniversary of the Armenian genocide.

After two successful performances in Bulgarian, which were presented on 25 April and 16 May this year, with very strong interest from Plovdiv, the hall is filled again on 27 June, when was announced the premiere in Armenian. 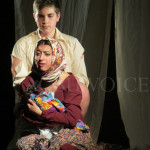 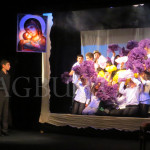 Artists of children’s drama group “Malvina Manukyan” to AGBU Plovdiv Chapter prepared the premiere in Armenian in less than a month. Strong episodes of the novel, which involved 5 to 18 years old artists showed the suffering of the Armenian people, were selected by director Evelina Nikolova. They strongly impressed the author of the novel, which arrived from Romania for the first performance in Armenian. With tears in his eyes and excited by what he saw, Varujan Voskanyan climbed on stage and shared that his tears were caused by the joy that images of his grandfathers Setrak and Garabed lived again, brought to live by the small artists.

When Silva Dolmayan (co- director) shared how intensively worked with the children to prepare for their roles in Armenian, and that among them are children of Bulgarian origin and of mixed marriages, Varujan Vosganian replied with a smile – “Just one drop of Armenian blood in the veins is sufficient to feel an Armenian. ”

Happy smiles appeared on the children’s faces when Mr. Vosganian publicly invited them to present the show in Bucharest and Constanta.
Hripsime Erniasyan